My favorite folktale is The Legend of Three Trees! The lesson it teaches goes way beyond anything that can be considered "just a children's story"!

Walk through the life of Jesus and see that God's plans are bigger and better than any dream!  This story of three trees is a great read for Easter or anytime.  Children will smile and adults will sigh with wonder at the end.

Story - The Legend of Three Trees 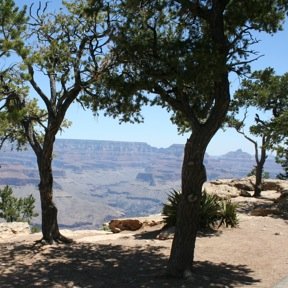 Once there were three trees on the top of a hill overlooking a small valley. There they discussed their hopes and dreams.

The first tree said, "Some day I hope to be a treasure chest. I want to be filled with gold, silver and precious gems! I'll be decorated with intricate carvings and everyone will see my beauty."

The second tree spoke next, "Someday I will be a mighty ship. I will take Kings and Queens across the seas and sail to the far corners of the earth. Everyone will feel safe in me because of the strength of my hull."

Finally, the third tree said, "I want to stay right here and grow to be the tallest and straightest tree in the forest. People will look up to my branches as I stand on this hill and think of the heavens and how close I am to reaching them. I will be the greatest tree of all time and people will always remember me."

(All of us have dreams just like the trees in The Legend of Three Trees!)

After a few years of praying their dreams would come true, a group of woodcutters came upon the trees. When one of them came to the first tree he said, "This looks like a strong and beautiful tree, I think I would be able to sell this tree to a carpenter."

And he began to cut the tree down. The tree was very happy because he knew that a carpenter could make him into a treasure chest just like he dreamed.

At the second tree another woodcutter spoke, "This looks like a strong tree too, I should be able to sell this tree to a shipyard."

The second tree was even happier than the first tree because he knew that he was on his way to becoming a mighty ship.

When the other woodcutter saw the third tree, the tree was frightened because he heard the woodcutter say, "I don't have any special need for this tree, but I'll just cut it down and see later if I will have any need of it."

When the first tree arrived at the carpenter's, he was surprised to be made into a simple feed-box for animals. He was placed in a barn and filled with hay so the animals could eat. This was not what the first tree had dreamed of, or prayed for, and he was very disappointed.

The second tree was taken to the shipyard, but he wasn't made into a large ship. He became a plain fishing boat with only the strength to carry a few fishermen. His dreams of being a mighty ship, carrying Kings and Queens across the seas, faded away.

The third tree was cut up into large ugly beams then left all alone in the darkness.

Many years went by and all three trees forgot about their hopes, their dreams and their prayers.

(Have you ever been at a point in life in which you felt like your dreams were gone forever? Just like in Legend of Three Trees we can be encouraged that God is always in control and when we trust Him, He is able to do exceeding, abundantly more than we can think or imagine! (Ephesians 3:20)

Finally, one day a man and a woman came to the barn to stay because there was no room anywhere else. The woman gave birth to a baby boy while she was there, and she placed him in the hay in the plain, simple feed-box.The man wished he could have made a proper crib for the baby but this feed-box would have to do.

Somehow the first tree felt the importance of this event and knew that he had indeed held the greatest treasure of all time!

Some years later a group of men got into the small fishing boat made from the timber of the second tree. One of them was tired and fell fast asleep.  A great storm came up and the second tree did not think he was strong enough to keep the men safe.

The other men in the fishing boat then woke the man who was asleep and he said, "Peace!" and the storm suddenly stopped.

Now the second tree knew he had indeed carried the King of Kings.

About three years later, someone came and pulled the third tree's beams from the dark shed. It was carried through the streets as the people mocked the man who was carrying it. When they came to a stop on top of a small hill, they nailed the man to the tree. Then they raised it into the air for him to die there. She shuddered in shame.

When Sunday morning came though, the third tree suddenly came to realize that it was indeed strong enough to stand on the top of a hill for all to see and know he was closer to heaven than he could ever have imagined.

That was better than being the tallest tree in the world!

Original author of The Legend of Three Trees is unknown - traditional folktale.

"For I know the plans I have for you," says the LORD. "They are plans for good and not for disaster, to give you a future and a hope. In those days when you pray, I will listen. If you look for me in earnest, you will find me when you seek me. I will be found by you," says the LORD."

Seek Him....He says He will be found by us, when we seek Him with our whole heart!

Just as The Legend of Three Trees points out - God's plans for us are bigger and better than anything we could ever dream!

Resources and lessons to teach using The Legend of Three Trees.

Printable copy of the story - Legend of Three Trees

More Christian stories like the Story of the Three Trees