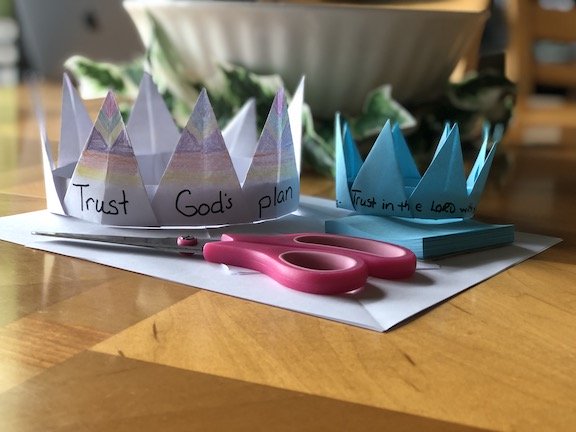 Lesson Summary:  God used Esther, an ordinary orphan, to become a queen and hero for His people.  God has a plan for each of us as we trust and follow Him each and every day.  His ultimate plan is that we become His children - princes & princesses!

Time/Audience:  This lesson took about 30-40 minutes with a group of 12 third and fourth graders.  It is easily adaptable to be used with both younger children and youth.

Scripture:  The Book of Esther

Key Takeaway:  We can trust God's plan when we know and trust Him.

Give each student two sheets of 8 ½ X 11 inch paper (copy, construction, notebook, etc.) and a pair of scissors of 8-10 square post-it notes.

Do NOT tell the students what they are making.  This is demonstrating how we are to trust and follow God even though we may not know His plans for us.

Demonstrate and lead them through the steps of making 8-10 individual pieces as seen in the video below.  Along the way ask what they think they may be making.  Also ask if they are getting frustrated with you for not telling them.

Explain that many times in life we may not know what is ahead or where God is leading, but when we know Him and His love for us, we can trust Him and His plan.

Once everyone has their pieces, show them how to connect them together while still discussing what you may be creating.  Finally show them how to make it into a circle and see that they have made a crown.

Tell them a crown has a very important part in the Bible story lesson you will be discussing today in the Book of Esther.

Locating The Book of Esther

I always like to let my students know it is okay to use the Table of Contents in their Bibles if they are not sure where a Book of the Bible is.

As they are locating Esther, explain that it is in the Old Testament and is one of the twelve Books of History.  It is actually the last one and comes right before the Book of Job.

Another way to easily find the Book of Esther is to open your Bible to the middle; it usually will be somewhere in the Book of Psalms.  Then turn back a few pages to find Esther.

Today we're going to learn that God had a plan for Esther and God has a plan for each of us.  You didn't know what we were making; you had to follow my directions and trust me.  In the same way, we don't know all God has planned for us, but we can know Him and learn to trust His directions for our life.

A special Plan - Orphan to Queen

King Xerses or Ahasuerus, had a big party and invited many of the people from across the land.  They were having a grand time when he decided he wanted to show off his beautiful Queen Vashti, but she didn't want to come and refused the king.  The king became very angry and was advised by those around him to banish her from ever coming into the king's presence again.

Now he needed a new queen; so his officials advised him to hold a "beauty contest."  All the young women in the land were brought to the palace for a year of beauty treatments including an orphan named Haddassah or as we may have heard of her before - Esther.

"At that time there was a Jewish man in the fortress of Susa whose name was Mordecai son of Jair. He was from the tribe of Benjamin and was a descendant of Kish and Shimei. 6 His family had been among those who, with King Jehoiachin of Judah, had been exiled from Jerusalem to Babylon by King Nebuchadnezzar. 7 This man had a very beautiful and lovely young cousin, Hadassah, who was also called Esther. When her father and mother died, Mordecai adopted her into his family and raised her as his own daughter." NLT

How sad and hopeless Haddasah must have felt losing both her parents; she probably lost hope.  God had special plans for her though, and we know there is always hope with Jesus!

"Esther had not told anyone of her nationality and family background, because Mordecai had directed her not to do so. 11 Every day Mordecai would take a walk near the courtyard of the harem to find out about Esther and what was happening to her."

"Esther was the daughter of Abihail, who was Mordecai’s uncle. (Mordecai had adopted his younger cousin Esther.) When it was Esther’s turn to go to the king, she accepted the advice of Hegai, the eunuch in charge of the harem. She asked for nothing except what he suggested, and she was admired by everyone who saw her.  Esther was taken to King Xerxes at the royal palace in early winter of the seventh year of his reign.  And the king loved Esther more than any of the other young women. He was so delighted with her that he set the royal crown on her head and declared her queen instead of Vashti." NLT

Connection - Esther was not only beautiful on the outside, she had a character that was obedient and wise.

Esther knew she could trust both Mordecai and Hegai for they demonstrated their care for her.  In the same way, we can trust God for He has demonstrated His own love for us in that while we were still sinners, Christ died for us. (Romans 5:8)

Care leads to trust and trust leads to obedience.

The king loved Esther and chose her to be his next queen.

Now that Esther was queen, you'd think that was a fairy tale ending - "they all lived happily ever after."  Not yet though, for there was a wicked man named Haman.

After Esther became queen there were those in the kingdom that planned to kill the king.  Mordecai overheard their scheme and told Esther who told the king, and they were able to save his life.  Soon after the king promoted a man named Haman to a position of power; the king was not aware of Haman's wicked heart.  Haman was proud and did not like Mordecai because he would not bow to honor Haman.

"When Haman saw that Mordecai would not bow down or show him respect, he was filled with rage.  He had learned of Mordecai’s nationality, so he decided it was not enough to lay hands on Mordecai alone. Instead, he looked for a way to destroy all the Jews throughout the entire empire of Xerxes." NLT

Mordecai sent word to Esther that she must speak to the king in defense of the Jewish people.  This sounds like a simple thing since she was the queen, but anyone who approached the king without an invitation could be put to death...even the queen.

Mordecai's next words are probably the most well-known from the Book of Esther.

"If you keep quiet at a time like this, deliverance and relief for the Jews will arise from some other place, but you and your relatives will die. Who knows if perhaps you were made queen for just such a time as this?” NLT

Queen Esther was wise.  She trusted Mordecai, but she ultimately trusted God.  She sent word for all the Jews in the land to fast and pray; she also fasted and prayed.  Then she risked her life to save the lives of many.  That's what made her a heroine.  She put others before herself.

She was also wise in that she did not immediately accuse Haman.  The remaining chapters of the Book of Esther tell us she invited both Haman and the King to a couple of banquets.  Haman proudly came, but did not realize that his plan to have Mordecai and the Jews put to death would also sentence the queen to death. Remember, the king loved his queen, Esther.

Ultimately Haman was the one who lost his life while Mordecai, the Jewish people and Queen Esther all lived and were held in high esteem from then on by all the people in the land. 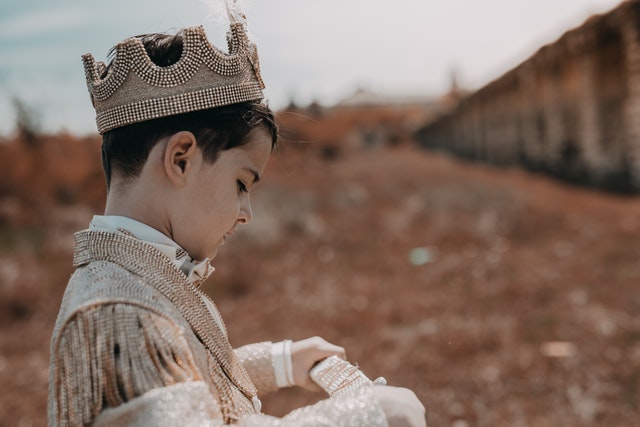 Proverbs 3:5-6 is an excellent memory verse to go with this lesson.  Have students write it on their crowns to have it to practice at home.  If time permits, they can also decorate their crowns.

"Trust in the Lord with all your heart

and lean not on your own understanding;

in all your ways submit to him,

and he will make your paths straight." NIV

The celebration of Esther's rescue of the Jewish people is called Purim.  Here are a couple of activities students may enjoy.

Finger puppets of the characters in the Book of Esther can be colored and used to retell the Bible story.

This "Look & Find" activity has several things within a picture from the Bible story for students to discover.  This could be printed or give them the link so they can see it on a computer screen.

This maze can be printed for kids to lead Mordecai through the city to be honored.

These extra Purim activities are made possible by the Orthodox Union and Tori Avey.