I love using the Charles Blondin story as an illustration of faith!  Not only was he a fascinating man, but the story of his pushing a wheelbarrow across Niagara Falls is one in which kids as well as adults can identify the difference between mere belief (head knowledge) and true faith (belief in action; heart knowledge).

An Acrobat, A Wheelbarrow, and a Challenge of Faith 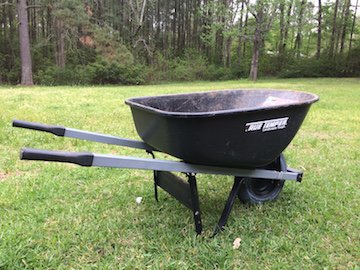 Can you imagine a tightrope stretched over a quarter of a mile and spanning the breadth of Niagara Falls?  The thundering sound of the pounding water drowning out all other sounds as you watch a man step onto the rope and walk across!

This stunning feat made Charles Blondin famous in the summer of 1859.  He walked 160 feet above the falls several times back and forth between Canada and the United States as huge crowds on both sides looked on with shock and awe.  Once he crossed in a sack, once on stilts, another time on a bicycle,  and once he even carried a stove and cooked an omelet!

On July 15, Blondin walked backward across the tightrope to Canada and returned pushing a wheelbarrow.

The Blondin story is told that it was after pushing a wheelbarrow across while blindfolded that Blondin asked for some audience participation.  The crowds had watched and "Ooooohed" and "Aaaaahed!"  He had proven that he could do it; of that, there was no doubt.  But now he was asking for a volunteer to get into the wheelbarrow and take a ride across the Falls with him!

It is said that he asked his audience, "Do you believe I can carry a person across in this wheelbarrow?"  Of course the crowd shouted that yes, they believed!

It was then that Blondin posed the question - "Who will get in the wheelbarrow?'

(Later in August of 1859, his manager, Harry Colcord, did ride on Blondin's back across the Falls.)

The Charles Blondin Story - a Picture of Faith

The story of Charles Blondin paints a real life picture of what faith actually is. The crowd had watched his daring feats. They said they believed, but their actions proved they truly didn't.

It's one thing for us to say we believe in God. It's true faith though when we believe God and put our faith and trust in His Son, Jesus Christ.

Don't worry, Jesus has carried many across to Heaven's gates. He can be trusted!

Drama skit based on the Charles Blondin story...