We made these Resurrection rolls with our kids as they were growing up.  They are a fun and quicker version of making the Resurrection cookies and oh so yummy!

These can be made on Easter morning for family or during a Sunday school hour; they only take about 15 minutes to make and then 15 minutes to bake! 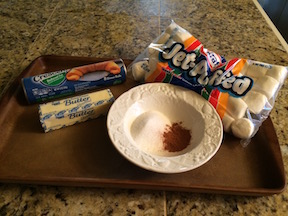 Melt butter in shallow dish.  Mix sugar & cinnamon together in a separate dish.

"Now there was a man named Joseph, a member of the Council, a good and upright man, 51 who had not consented to their decision and action. He came from the Judean town of Arimathea, and he himself was waiting for the kingdom of God. 52 Going to Pilate, he asked for Jesus’ body. 53 Then he took it down, wrapped it in linen cloth and placed it in a tomb cut in the rock, one in which no one had yet been laid. 54 It was Preparation Day, and the Sabbath was about to begin.

55 The women who had come with Jesus from Galilee followed Joseph and saw the tomb and how his body was laid in it. 56 Then they went home and prepared spices and perfumes. But they rested on the Sabbath in obedience to the commandment."

Encourage participants to think about these verses as they add the cinnamon spice to the marshmallow and wrap it in the dough.

Roll a marshmallow in butter, then sugar mixture, and place in the center of a crescent roll. 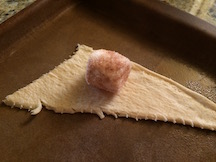 Cover the marshmallow with the dough pinching seems closed securely and place on a greased cookie sheet. Repeat with each of the resurrection rolls. 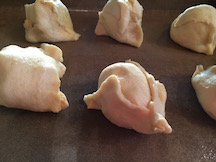 Have them check to make sure their seems are sealed tightly as you read Matthew 27:62-65.  Have them take time to think about how well guarded and sealed the tomb was.

62 "The next day, the one after Preparation Day, the chief priests and the Pharisees went to Pilate. 63 “Sir,” they said, “we remember that while he was still alive that deceiver said, ‘After three days I will rise again.’ 64 So give the order for the tomb to be made secure until the third day. Otherwise, his disciples may come and steal the body and tell the people that he has been raised from the dead. This last deception will be worse than the first.”

65 “Take a guard,” Pilate answered. “Go, make the tomb as secure as you know how.” 66 So they went and made the tomb secure by putting a seal on the stone and posting the guard."

Place in oven to bake for 10-15 minutes; allow to cool a bit before serving because melted marshmallow will be hot!

While the rolls are baking have everyone be thinking what it must have been like for the disciples and other followers as they grieved His death and waited.  Ask if they think His followers remembered things Jesus had said about His resurrection?

Read Luke 24:1-8 after removing the rolls from the oven.  Then pray a prayer of praise and thanksgiving before serving them to eat. (This will also allow the marshmallow to cool a bit!

"On the first day of the week, very early in the morning, the women took the spices they had prepared and went to the tomb. 2 They found the stone rolled away from the tomb, 3 but when they entered, they did not find the body of the Lord Jesus. 4 While they were wondering about this, suddenly two men in clothes that gleamed like lightning stood beside them. 5 In their fright the women bowed down with their faces to the ground, but the men said to them, “Why do you look for the living among the dead? 6 He is not here; he has risen! Remember how he told you, while he was still with you in Galilee: 7 ‘The Son of Man must be delivered over to the hands of sinners, be crucified and on the third day be raised again.’ ” 8 Then they remembered his words."

Have everyone open their rolls and see that they are now empty; say all together "He is risen!" and then enjoy eating the Resurrection rolls! 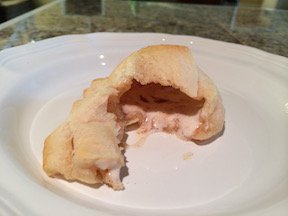 Resurrection rolls are a great alternative to cinnamon rolls on Easter morning and will definitely add to the excitement of celebrating that Jesus is alive!