As our kids were growing up, we created a "Gospel Egg" - a single resurrection egg or "Promise Egg" to share the gospel story and true meaning of Easter rather than a regular "golden" or surprise egg.  This was before the days we were able to purchase or knew about making resurrection eggs, which I am so thankful are popular today!

This is just another way to incorporate the wonderful Easter story message of the Gospel into our celebrations!  Small ones can be made as a great church take-home Easter craft for kids to share with their own families & friends! 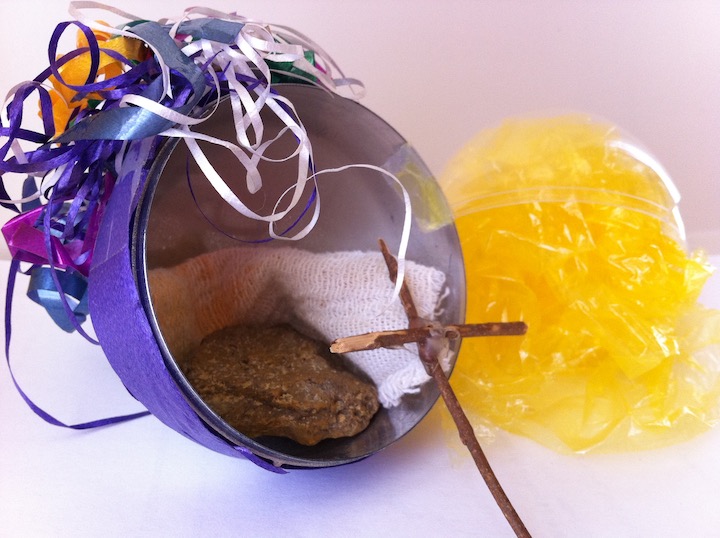 We used one of the "Leggs" stocking eggs...way back, but there are other large eggs you can buy now.  Inside we placed:

When the Gospel Egg was closed, all that could be seen was the golden cellophane and rainbow ribbon.  It looked like an Easter celebration waiting to happen!

This became one our families favorite Easter traditions.  All four of our kids would be excited...and competitive to be the one that found the Gospel Egg! 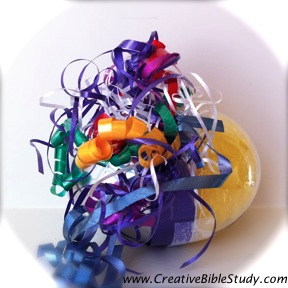 Whoever found the Gospel Egg got to share the Easter Story and the true meaning of Easter!

Now usually when someone finds a golden egg, there is a special surprise included.  To represent what a wonderful gift God's salvation is, we would include an extra special something for the Gospel Egg finder too!

One neat idea is to include a surprise that the finder can share with everyone else just like we should share the good news of Jesus Christ with others! 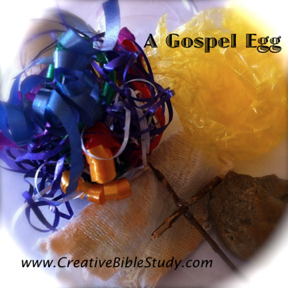 Scriptures to use with the Gospel Egg

John 3:16 - "For God so loved the world, that He gave His only begotten Son, that whoever believes in Him shall not perish, but have eternal life."

Romans 5:17 - "For if, by the trespass of the one man, death reigned through that one man, how much more will those who receive God's abundant provision of grace and of the gift of righteousness reign in life through the one man, Jesus Christ!"

Jesus' Death for Our Sin

John 17:18-19 “Carrying his own cross, he went out to the place of the Skull (which in Aramaic is called Golgotha). Here they crucified him, and with him two others--one on each side and Jesus in the middle."

Romans 6:23 -   "For the wages of sin is death, but the gift of God is eternal life in Christ Jesus our Lord."

His Payment - Romans 5:8 - "But God demonstrates his own love for us in this: While we were still sinners, Christ died for us."

Matthew 28:5-6 “The angel said to the women, "Do not be afraid, for I know that you are looking for Jesus, who was crucified. He is not here; He has risen, just as he said. Come and see the place where he lay.”

Romans 10:9-10 "that if you confess with your mouth Jesus as Lord, and believe in your heart that God raised Him from the dead, you will be saved; for with the heart a person believes, resulting in righteousness, and with the mouth he confesses, resulting in salvation."

John 3:16-18
“For God so loved the world, that He gave His only begotten Son, that whoever believes in Him shall not perish, but have eternal life. For God did not send the Son into the world to judge the world, but that the world might be saved through Him. He who believes in Him is not judged; he who does not believe has been judged already, because he has not believed in the name of the only begotten Son of God." 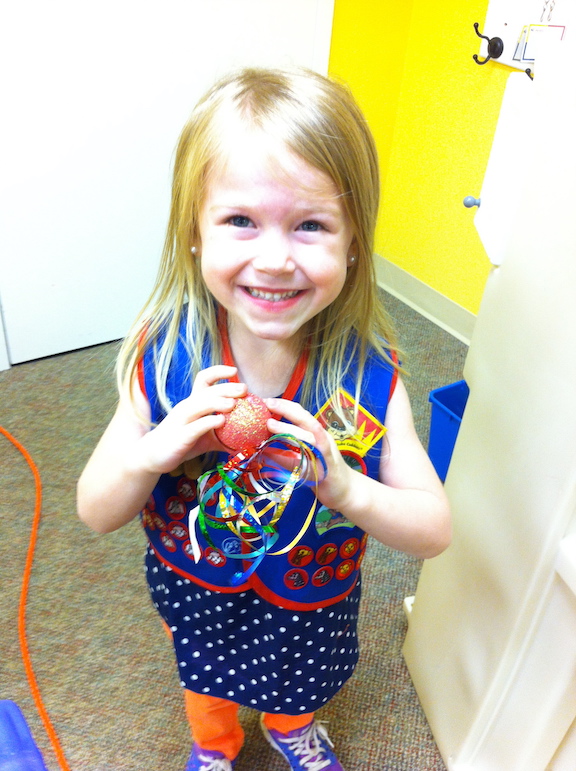 These are fun to make with your  Sunday school class or Awana kids too; even preschoolers will enjoy this Easter activity! This way each child can take one home and share the Gospel story with their friends and family!  Make sure to print out the Scriptures - John 3:16-18 to fold up and place in each egg!

Even now that our kids are all in their twenties, we still have our same golden "Gospel Egg".  Sometimes they still like to have an Easter Egg hunt and bring it out, but whether we do or not, the resurrection story still remains the center of our Easter celebration...as well as each day of our lives! 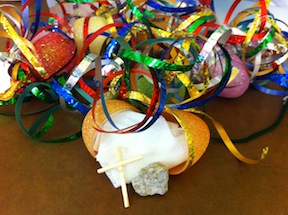 Other Easter Activities for families & churches...

For another Easter Bible lesson for preschoolers, take a look at these E.A.S.T.E.R. eggs!