The Easter story is from the Bible and tells of the death, burial, and resurrection of Jesus Christ, the Son of God!  It is a story that can change our lives, because it is the story of God's powerful love for each of us and the sacrifice He gave!

We celebrate Jesus' resurrection on Easter Sunday, but there would be no resurrection without His suffering death on a cross and buried in a borrowed tomb! 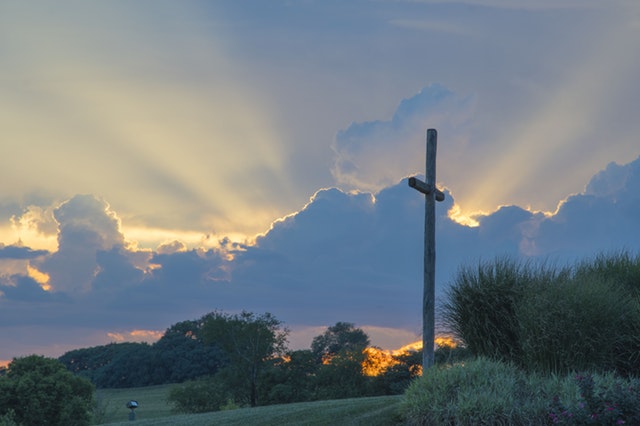 Easter brings hope to our everyday lives as well as for a future heavenly home with God.  Can you imagine how Jesus' followers must have felt waiting those hours and days between the cross and the empty tomb?  Waiting is hard!

It’s quiet, things seem hopeless, and it appears that nothing will ever change. But, it is in this blank space that the greatest miracle is taking place. May we never forget that in our blank spaces we have a mighty God that is still in the miracle business. He is still moving mountains on our behalf. He is still breaking chains. He is still resurrecting dreams. He is still saving lives. He is still on His throne! He sees! He knows! He’s working even when all we see is a blank space!

All four of the Gospels - Matthew, Mark, Luke, & John, give account of the Easter Story.  It's good to read from all four because each account adds to the story!

Understand the following is abbreviated version of the Easter Story to just capture the highlights.  We'll begin from the night before Jesus' crucifixion because His example of being a servant is so important! Using the New Living Translation, we have taken Bible verses from the Gospel of John highlighting main events of the Easter Story.

We chose the Gospel of John because he was an eyewitness of these events.  John was one of the three of Jesus' inner circle. John, James and Peter were present at events such as the Transfiguration and the closest to Jesus as He prayed in the Garden of Gethsemane.

He calls himself "the disciple whom Jesus loved" in John 20:2 not because of feeling pride that he was better than the others, but because he valued the love of Christ above all.  It was amazing to him as it should be to us!

Before the Passover celebration, Jesus knew that His hour had come to leave this world and return to his Father. He now showed the disciples the full extent of his love.  It was time for supper, and the Devil had already enticed Judas, son of Simon Iscariot, to carry out his plan to betray Jesus.  Jesus knew that the Father had given him authority over everything and that he had come from God and would return to God.  So He got up from the table, took off his robe, wrapped a towel around his waist,  and poured water into a basin. Then He began to wash the disciples' feet and to wipe them with the towel he had around Him. (John 13:1-5)

Jesus' Arrest in the Garden of Gethsemane

After saying these things, Jesus crossed the Kidron Valley with his disciples and entered a grove of olive trees.  Judas, the betrayer, knew this place, because Jesus had gone there many times with his disciples.  The leading priests and Pharisees had given Judas a battalion of Roman soldiers and Temple guards to accompany him. Now with blazing torches, lanterns, and weapons, they arrived at the olive grove. Jesus fully realized all that was going to happen to him. Stepping forward to meet them, he asked, "Whom are you looking for?"   "Jesus of Nazareth," they replied. "I am he," Jesus said. Judas was standing there with them when Jesus identified himself.  And as he said, "I am he," they all fell backward to the ground!  Once more he asked them, "Whom are you searching for?" And again they replied, "Jesus of Nazareth."  "I told you that I am he," Jesus said. "And since I am the one you want, let these others go." (John 18:1-8)

Then Pilate had Jesus flogged with a lead-tipped whip.  The soldiers made a crown of long, sharp thorns and put it on his head, and they put a royal purple robe on him.  "Hail! King of the Jews!" they mocked, and they hit him with their fists.  Pilate went outside again and said to the people, "I am going to bring him out to you now, but understand clearly that I find him not guilty."  Then Jesus came out wearing the crown of thorns and the purple robe. And Pilate said, "Here is the man!"  When they saw him, the leading priests and Temple guards began shouting, "Crucify! Crucify!" (John 19:1-6a)

Carrying the cross by himself, Jesus went to the place called Skull Hill (in Hebrew, Golgotha).  There they crucified him. There were two others crucified with him, one on either side, with Jesus between them.  And Pilate posted a sign over him that read, "Jesus of Nazareth, the King of the Jews."  The place where Jesus was crucified was near the city; and the sign was written in Hebrew, Latin, and Greek, so that many people could read it.  Then the leading priests said to Pilate, "Change it from 'The King of the Jews' to 'He said, I am King of the Jews.'"  Pilate replied, "What I have written, I have written. It stays exactly as it is."  When the soldiers had crucified Jesus, they divided his clothes among the four of them. They also took his robe, but it was seamless, woven in one piece from the top.  So they said, "Let's not tear it but throw dice to see who gets it." This fulfilled the Scripture that says, "They divided my clothes among themselves and threw dice for my robe." So that is what they did. (John 19:17-24)

Jesus knew that everything was now finished, and to fulfill the Scriptures he said, "I am thirsty."  A jar of sour wine was sitting there, so they soaked a sponge in it, put it on a hyssop branch, and held it up to his lips.  When Jesus had tasted it, he said, "It is finished!" Then he bowed his head and gave up his spirit. (John 19:28-30)

Afterward Joseph of Arimathea, who had been a secret disciple of Jesus (because he feared the Jewish leaders), asked Pilate for permission to take Jesus' body down. When Pilate gave him permission, he came and took the body away.  Nicodemus, the man who had come to Jesus at night, also came, bringing about seventy-five pounds of embalming ointment made from myrrh and aloes.  Together they wrapped Jesus' body in a long linen cloth with the spices, as is the Jewish custom of burial.  The place of crucifixion was near a garden, where there was a new tomb, never used before.  And so, because it was the day of preparation before the Passover and since the tomb was close at hand, they laid Jesus there.  (John 19:38-42)

The Resurrection of Jesus Christ

Early Sunday morning, while it was still dark, Mary Magdalene came to the tomb and found that the stone had been rolled away from the entrance.  She ran and found Simon Peter and the other disciple, the one whom Jesus loved. She said, "They have taken the Lord's body out of the tomb, and I don't know where they have put him!"  Peter and the other disciple ran to the tomb to see.  The other disciple outran Peter and got there first.  He stooped and looked in and saw the linen cloth lying there, but he didn't go in.  Then Simon Peter arrived and went inside. He also noticed the linen wrappings lying there,  while the cloth that had covered Jesus' head was folded up and lying to the side.  Then the other disciple also went in, and he saw and believed -- (John 20:1-8)

One really unique way to share the Easter Story with children is using Resurrection Eggs! These are available for purchase or you can create your own!

There are so many wonderful Christian children's books that share the truths and beauty found in the Easter Story!

Use fun, creative Easter Story activities to go along with sharing the wonderful news of Jesus' death, burial, and resurrection!  There are also some creative ways to share the Good News with others during the Easter season!