The Easter Story -
to go with Resurrection Eggs

I was asked to share the Easter Story using a set of resurrection eggs with a large group of children for our church's Easter Egg hunt.  I didn't want to read it from a book, but wanted them to be able to participate and use actual Bible verses.  I also wanted to make sure the story was accurate from Scripture and contained the message of the Gospel for the kids as well as adults visiting our church. 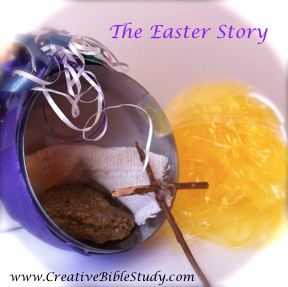 When using this story, allow the child that found each numbered egg to come up and open it for all to see what is in it before proceeding with each section of the story.  To print, here is a pdf Easter Story copy.

We will be hiding all twelve of the resurrection eggs for the kids to find and have them each numbered 1 - 12.  You may make your own Resurrection Eggs with objects or with these printable pictures for resurrection eggs that can be printed and cut apart to fit into the eggs.  As with any storytelling, make sure to practice first so that it will flow and be shared from your heart not just memory.

The Story of Easter with Bible verses

Today I need your help to tell a story!  Everyone loves a story, and this is a TRUE story!

Long, long ago in a far away land called Israel (close to where some of your moms & dads in the military have served recently) there lived a man named Jesus.  Now He was no ordinary man! He was the Son of God.  He helped create the heavens and the earth, but He had left heaven and was sent by God, His Father, to earth to live as a man.  He lived a perfect life while He was here.  He never sinned; He never disobeyed God.  He was tempted just like we are, but He never sinned. Everything He did and said pleased His Father, God.

He came for a very special mission; He didn't just come to live as a man, He came to die and pay the price owed because our sin.  He came to rescue us and pay what we couldn't.  He came to make it possible for us to live with Him FOREVER...because He loves us so much! 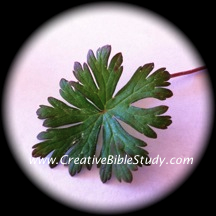 When Jesus was about 33 years old (about the age of some of your parents), He rode a donkey into a city called Jerusalem.  The people were so excited to see Him!  They called Him their King!

Mark 11:8-10 “Many people spread their cloaks on the road, while others spread branches they had cut in the fields. Those who went ahead and those who followed shouted, "Hosanna!" "Blessed is he who comes in the name of the Lord!"

Raise your hands like branches and let's shout "Hosanna!" 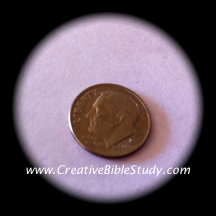 Easter Story Egg 2 - a silver coin (I may put a few so they jingle!)

But not everyone was glad to see Jesus.  Many of the Jewish religious leaders of the city did not want the people praising and worshipping Jesus.  They made a plan; they wanted to kill Jesus and one of Jesus’ disciples said he would help them.

Matthew 26:14‐15 “Then one of the Twelve‐‐the one called Judas Iscariot‐‐went to the chief priests and asked, "What are you willing to give me if I hand Him over to you?" So they counted out for him thirty silver coins.” 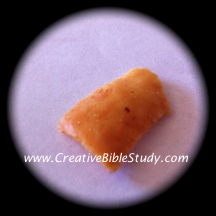 Easter Story Egg 3 - a small cracker or piece of one

There was a celebration going on in the city called The Passover.  It helped the people remember when God rescued them out of Egypt; remember the story of Moses?!  It’s another exciting and TRUE story from the Bible!

This time though, Jesus wanted them (and us) to remember how He was about to rescue from sin!

“While they were eating, Jesus took some bread, and after a blessing, He broke it and gave it to the disciples, and said, “Take, eat; this is My body.” 27 And when He had taken a cup and given thanks, He gave it to them, saying, “Drink from it, all of you; 28 for this is My blood of the covenant, which is poured out for many for forgiveness of sins.” 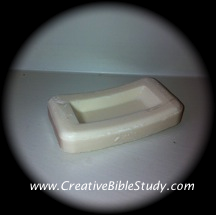 After dinner, Jesus did a very strange thing…He began washing the disciples feet!  (I bet they were stinky feet too...they wore open shoes like sandals or flip-flops on dusty streets!)  He did this to not only show them it is good to serve others, but also so they would see their need to get clean.  He wanted it to remind them, and us, that sin is like dirt in our lives that we can’t clean on our own.  We need Jesus to make us clean by forgiving our sin!

Hold your nose like you smell their stinky feet! 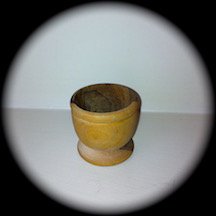 Jesus needed to talk to His Father, God.  He went to a garden to pray.

Matthew 26:39  “And He went a little beyond them, and fell on His face and prayed, saying, “My Father, if it is possible, let this cup pass from Me; yet not as I will, but as You will.”

Even though Jesus was & is God, this mission was not easy.  He was willing though because He wanted to obey God and He knew it was the only way to give us hope.  He loves us so much!

Put your hands together like when we pray; let’s remember we can talk to God too anywhere and anytime! 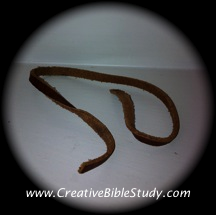 Remember those religious leaders and their plan to kill Jesus?  While Jesus was still in the garden, they sent people to arrest Him!  Judas Iscariot was there to lead them.

Matthew 27: 2, 26 “They bound him, led him away and handed him over to Pilate, the governor.” (26) “Then he released Barabbas to them. But he had Jesus flogged, and handed Him over to be crucified.”

“Flogged” means to be whipped and beaten.  That’s what they did to Jesus.

Clap your hands loud like the sound of a whip. 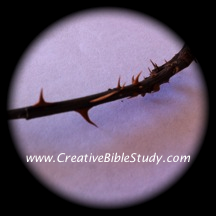 Matthew 27:29 “and then twisted together a crown of thorns and set it on His head. They put a staff in his right hand and knelt in front of him and mocked him. "Hail, king of the Jews!" they said.”

They made fun of Jesus!  Jesus did not fight back though; He took all that punishment just for us!

Act like you’re holding a crown on your head & remember Jesus is the King of Kings! 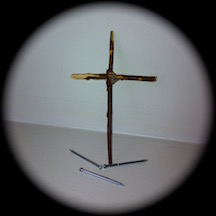 John 17:18‐19 “Carrying his own cross, he went out to the place of the Skull (which in Aramaic is called Golgotha). Here they crucified him, and with him two others‐‐one on each side and Jesus in the middle.”

The nails they used to nail Jesus to the cross of course were much bigger.  They used one on each hand and another for His feet.  They also stuck a spear in His side.  Jesus could have called thousands of angels to His rescue, but He voluntarily gave His life so that He could rescue us! 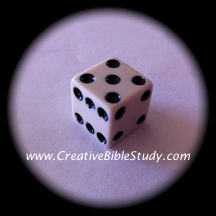 Matthew 27:35 “When they had crucified him, they divided up his clothes by casting lots.”

The soldiers gambled for His clothes.  Some people gamble with their lives and hope they can get to Heaven by their own good works.  Jesus said that He is the Way, the Truth, and the Life; no one can come to the Father except through Him. 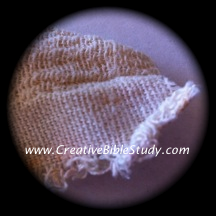 Joseph also had a friend with him that you may have heard of – his name was Nicodemus. Nicodemus was a religious leader that had gone to talk to Jesus at night because he didn’t want anyone else to know.  Jesus talked to Nicodemus about the need to be born again – not being born physically again, but being born by the Spirit of God.

In fact, I bet most of you know some of what Jesus said to Nicodemus!  Have you ever heard of John 3:16?

"For God so loved the world, that he gave his only begotten Son, that whosoever believeth in him should not perish, but have everlasting life." 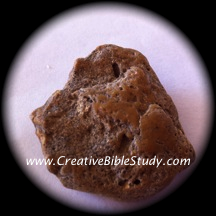 They had heard that Jesus said He would rise again in three days.  They wanted to make sure that didn’t happen!

Act like you are lifting a huge stone as big as a door! 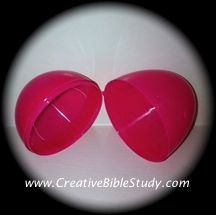 Let’s count to three like the 3 days before we open it…one, two three (open the egg)

Matthew 28:5‐6 “The angel said to the women, "Do not be afraid, for I know that you are looking for Jesus, who was crucified. He is not here; He has risen, just as he said. Come and see the place where He lay.”

The tomb was empty!  Jesus was alive…and still lives!

In fact, after Jesus rose from the grave the disciples and many others saw Him alive and talked with Him over a period of 40 days!  That’s over a month!

When Jesus left to go back to Heaven, He told them -

That can be for each of us too, when we choose to say YES to Jesus and accept and trust in what He did for us because He loves us so much!

Give the person next to you a High Five!